You are here: Home › Structures › Cabinet and ministers 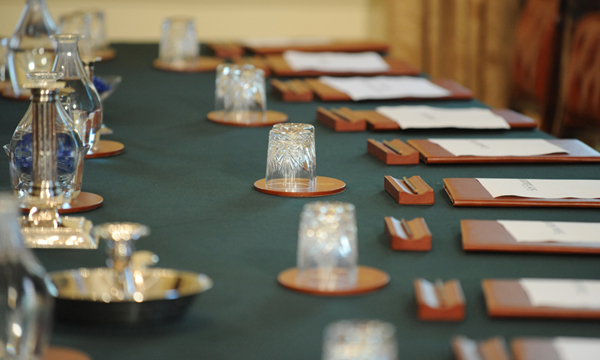 The Cabinet is the committee at the centre of British government. It is chaired by the Prime Minister who selects its members and recommends ministerial appointments to the Queen. It is the supreme decision-making body in British government. Most members are Secretaries of State by title, with some exceptions. The number of members that can be paid as Cabinet Ministers is limited by statute to 21. The Cabinet may contain non-portfolio posts (such as Lord Privy Seal). Only full members of Cabinet may attend. Some other members of the government may attend (for example Chief Whip in the Lords or Law Officers) by invitation. A list of current cabinet members can be found on the Number 10 website.

The Prime Minister selects cabinet members, agrees the agenda and chairs meetings, summing up and ‘taking voices’ (rarely formal votes) where necessary to arrive at an agreed conclusion. The Chancellor, Foreign Secretary, Home Secretary, Justice Minister / Lord Chancellor all have a major say on issues and sit in the middle of the table. Junior members down the table may not have the same impact.  There is both a formal and an informal ‘pecking order’.

Ultimately Cabinet’s aim is agreement, however arrived at. The minutes or conclusions are the final form of the agreement and their wording is of considerable importance to all members.

Powers and functions of Cabinet

Cabinet meets normally once a week in 10 Downing Street. It has no legal powers; these rest with the Secretaries of State. But it has collective responsibility to parliament so all members are bound to support cabinet decisions even if they are not present. If they cannot do so they must resign. Sensitive policy issues are usually decided in cabinet. The Report of the Machinery of Government Committee described its functions as:

All ministers are busy, have their own areas of expertise and have to take decisions together in a context of limited time, personal and political rivalry or alliance overlaid by common party political interest.

Much of Cabinet’s work is delegated to committees whose membership, composition and remit are determined by the Prime Minister. Most are ad hoc and miscellaneous in nature, often determined by the topical issues of the day. A list of current cabinet committees and their membership can be found on the Cabinet Office website.

Most are chaired by the Prime Minister or another senior minister. Each major committee, has a series of committees beneath it that look at special aspects of the issue. These are chaired by more junior ministers. Decisions taken in committees have full cabinet authority and do not have be brought to Full Cabinet.

The Secretary of the Cabinet, supported by the Cabinet Secretariat, is responsible for the preparation of records of its discussions and decisions as cabinet conclusions. The secretariat calls meetings, circulates papers, prepares the agenda (under the Prime Minister’s direction), writes and circulates the conclusions, and keeps them. It is one of the primary functions of the Cabinet Secretary to prepare a handling brief for the Prime Minister.

E-books are only avaliable with a University of Portsmouth login.

Cabinet itself does not have a dedicated website, however information is available on the Number 10 website. You can also take a virtual tour of the cabinet room at Number 10.

The Cabinet Office also has some useful information about Cabinet’s composition and committees. There is also a guide to Cabinet, primarily aimed at government departments.

The coalition government’s policy programme outlines what they, through the cabinet, aim to achieve.