You are here: Home › Structures › Civil service and government departments 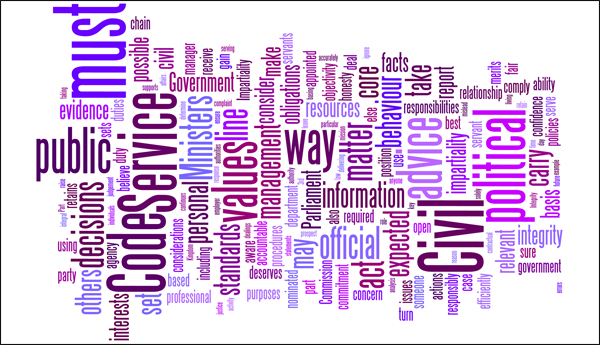 The civil service was first established in the middle of the nineteenth century on the basis of the Northcote-Trevelyan report.

There are three main characteristics of the British civil service:

Click here for an alternative text based PDF version of the above presentation.

Where do civil servants work?

Most British civil servants work in departments of state headed by ministers. Some work in agencies or for the devolved administrations or regulatory offices. A list of government departments (including websites) and ministers is available either on Parliament’s website or the Directgov website.

Over one quarter (and the most senior staff) work in London or the southeast of England.

Local authority staff, teachers, police, fire staff, university staff and the armed forces are not classed in the UK as civil servants. Overall, the UK public sector employs 5 million people; there are only half a million civil servants. This represents about 2% of the working population. The total number rose continually from 1945 to 1975, peaking at 750,000. It has since fallen to just under a half-million. This report from the Guardian newspaper provides an informative overview of the senior civil service.

This recording is to be used only for non-commercial educational purposes under the terms of an ERA Licence. For terms of use and to find and record more programmes please visit BoB National.

For off-campus access to the above video, enter ‘Portsmouth University – Students‘ in the ‘Where are you from?‘ login box, on the ‘Box of Broadcasts‘ website.

The civil service website gives some basic information about their role, along with a few facts and figures.

www.civilservant.org.uk is a useful website containing a wealth of information about the civil service in the UK.

The Secret World of Whitehall is another three part BBC documentary following various aspects of the civil service.

The Cabinet Office is the government department responsible for coordinating the civil service.

The Guardian newspaper’s website has a section devoted to civil service news. They have also visualized a map of senior civil servants.