You are here: Home › Structures › Parliament and law making 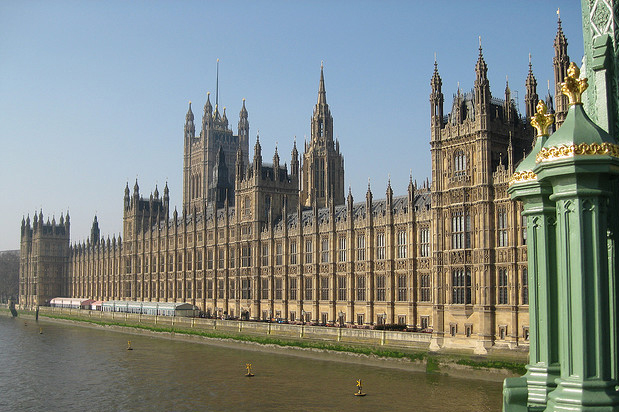 Parliament was originally established in 1264 to give counsel to the king, and to authorize the collection of taxes. The UK Parliament is bicameral, meaning it consists of two chambers, or ‘houses’.

Today the sovereign has little power. The Queen can dissolve parliament, or dismiss ministers, but in practice this only done on the advice of the Prime Minister. Her main role in the legislative process is to grant ‘royal assent’ to bills emerging from parliament to make them acts of law.

The Queen’s other role is to open parliament every year. (The video above shows the queen opening parliament in June 2010). Part of this involves her reading the Queen’s speech, where the government’s proposed policy and legislative programme is presented to the House of Lords and House of Commons.

The House of Lords The House of Lords is the upper house in parliament. Membership is around 740. This is composed of (mostly) life peers, hereditary peers and the ‘lords spiritual’ (the most senior Church of England archbishops / bishops). The current composition of the House of Lords can be found on the UK Parliament website.

This video provides an overview of the House of Lords’ role.

However, these plans were withdrawn when it was realised the government could not secure enough votes to pass them.

These proposals have already stimulated much debate, particularly in the House of Lords itself. However, due to a lack of political support these proposals are now on hold.

The House of Commons The House of Commons is the lower house in parliament. There are currently 650 members, known as Members of Parliament (MPs). This is due to be reduced to 600 at the next general election (caused by a review of constituency boundaries), although this is dependent upon support from MPs. The current political composition of the House of Commons can be found on the UK Parliament website.

MPs are elected using the ‘first-past-the-post’ system. Under this system each MP is elected to a geographical area known as ‘constituency’. Constituencies are ideally supposed to represent about 65,000 people; in reality they vary in size from about 30,000 to 100,000 (the reduction in MPs is an attempt to rebalance constituency sizes). There is only one MP per constituency. The candidate who secures the most votes is elected; a majority is not required. A referendum was held on 5 May 2011 where voters were asked if they would prefer to elect MPs using the ‘alternative vote’ system, however this was rejected.

You may like to watch the following videos which provide an overview of the House of Commons and the role of an MP.

There are six main functions of parliament:

In a parliamentary democracy like the UK, the government is not directly elected. Instead, the people elect a parliament from which a government is formed, usually by the party winning the most seats at the election. Unlike some countries, such as France or the USA, British ministers are drawn from parliament (usually from the Commons). However, the flexibility of the British constitution means there is no legal requirement for ministers to sit in parliament. MPs can also dismiss a government through a vote of ‘no confidence’. Although this is rare, the Labour government in 1979 was dismissed this way.

Parliament has to consider all proposals for legislation (bills which become Acts of Parliament if approved). A small number of these (about 5%) are produced by backbench MPs, but the bulk of legislation consists of government bills. These are drawn up in departments by civil servants and legal advisers and drafted by Parliamentary Counsel. Bills are examined in the respective houses before agreement is reached between the two houses on its content. It becomes law once royal assent is given. This interactive diagram details the process. Or watch the following 3 minute produced by the UK Parliament.

MPs often have little opportunity to change the proposals, particularly if the government has a large majority in the House of Commons. The 1997, 2001 and 2005 general elections produced strong Labour majorities, meaning many government proposals were not seriously challenged. Since the 2010 general election, however, the coalition government is in a more complex position.

Detailed scrutiny takes place in the House of Lords, but by (‘the Salisbury’) convention they do not vote down government proposals that appeared in the manifesto, although this is a convention that is not always now 100% adhered to. The Parliament Acts of 1911 and 1949 and other legislation and conventions have also placed limits on the House of Lords’ powers in the legislative process.

Scrutinising the work of ministers

There are various devices by which the opposition and backbench MPs can call the government to account. These include parliamentary questions, select committees (which can take evidence from witnesses and produce reports independently of government), speeches in debate and ‘early day motions‘.

In theory, MPs could have a good deal of control over taxation and government expenditure. In practice, most MPs are not very interested in dull financial matters, except on special occasions such as the annual budget and finance bill debates. However, the departmental select committees have power to scrutinise the “policy administration and expenditure” of each government department, and the Public Accounts Committee (with the professional assistance of staff in the National Audit Office) carries out retrospective examinations of the expenditure of departments.

Much of the national debate on matters of public interest is now carried out on television and radio programmes and in newspapers. Nevertheless, matters of national importance are debated in parliament. Usually these are issues chosen by the government, but there are certain days when the opposition can put forward its own topics. However, speeches are not usually listened to by many members and rarely change the views of other members who largely vote along party lines as instructed by their whips. Hansard keeps a record of debates that happen in parliament.

This has always been an important aspect of an MPs’ work. Since 1967 it has been augmented by the appointment of a Parliamentary Commissioner for Administration, or ‘Ombudsman’, who has the power to examine the records of government departments, but can only act on cases referred by MPs. There is also a Local Government Ombudsman who examines citizens’ complaints and recommend remedies. MPs also do much of work themselves, negotiating on behalf of constituents with local authorities, nationalised industries, the health service, and so on, and also putting questions and letters to ministers about the decisions of government departments in individual cases.

Parliamentary Affairs is an academic journal covering all aspects of parliament and the parliamentary system of government (University of Portsmouth login is required to access content).

Parliament’s website provides a wealth of information about it’s role and processes. They also have a You Tube channel with videos explaining various aspects of parliament.

The International Centre for Parliamentary Studies aims to promote good practice in parliament and policy making.

The Hansard Society aims “to strengthen parliamentary democracy and encourage greater public involvement in politics”. There is a section on their website devoted to research on parliament and government.